Each week, we'll examine a national retail ad and review what works, what doesn't and how it could have been improved...​

Let’s start off with the TV ads currently being run by Jos. A. Bank®, the nation-wide menswear retailer owned by Men’s Wearhouse. In it we see their usual over-the-top on-sale pitch for everything you can imagine and then some in men’s clothing and accessories all at embarrassingly discounted prices. “Two for the price of one,” "70 off of this and that"…then each 30 second ad concludes with the following tagline line:

“From stitch to store...that’s the Bank way!”

Here is an example of the ad:

Taglines are supposed to present, in a clear and compelling way, a brand’s unique value proposition and its promise to its customers. But here it’s unclear as to the brand managers intent… Does “Stitch” refer to the actual sewing/manufacturing of the products featured? Does this in turn imply that JAB is not a reseller of other brands (which apart from footwear, they are not)… and is this supposed to explain why the pricing doesn’t negate the quality of the clothing? Can a consumer, given this copy, be expected to process this line of thought? It seems like a long shot!

Jos. A. Bank is suffering from Marketing Myopia, a near sighted malady which renders them incapable of seeing beyond product and price… and thereby becoming consumer-centric. To do so, requires a brand identity which is both highly relevant to its customers and uniquely different from its competitors. However, they are a production driven company laboring in a consumer driven world.

For starters, what they could have done was to tell a story…their story. Something that’s genuine and that consumers could embrace. Their brand narrative & tagline line could have spoken about the benefits of “direct design and distribution” suggesting that control over product development and retail assortments, ensures brand value that it isn’t diminished by on sale pricing.

This isn’t much but it’s a start and surely better than continuing to try to “stitch” together an identity seemingly from remnants found on the factory floor.

* “Babble” … talking rapidly and continuously in a foolish, excited, or incomprehensible way…”

By George! Lessons in Leadership from George Washington, CEO

Part II: The Quest for Sustainability: The Need to Tap into Our Desires & Not Our Guilt To Effor

Brand Babble: Goya® ... Forgetting Its Roots as an Original 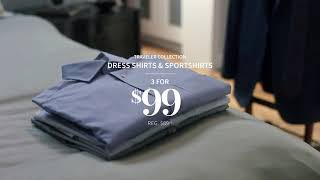